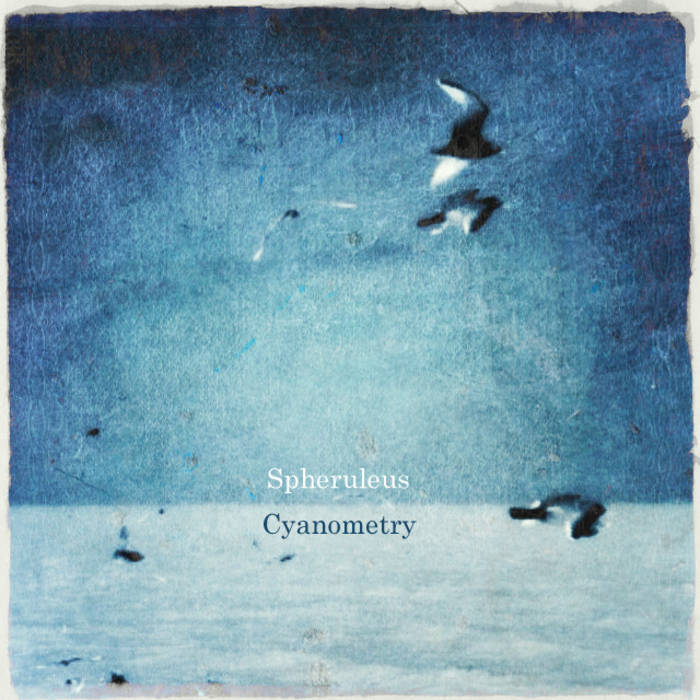 The cyanometer is a circular measuring instrument made from graduating shades of blue, originally created as means to measure the blueness of the sky. It was invented in the late 1700s by Horace Benedict de Saussore to assist his studies and fascination with the sky. He correctly supposed that the level of blueness visible in the sky was as a result of the amount of suspended particles present in the atmosphere.
In recent times, not much has been written about cyanometry and a quick scour of the internet will yield you little in the way of further reading.

It was on a particularly crisp blue day, the sort that would have had Saussore engaged, cyanometer at the ready when Harry Towell (Spheruleus) happened upon the concept for his latest project. He embarked on a long walk through the surrounding countryside in Lincolnshire, UK with the intention of drawing inspiration for a new body of work.
He had hoped that the quiet farmland, trees, fields and electricity pylons would provide the spark required to propell his work with sound yet on that day, it was the sky that fixated him and thus Cyanometry was born.

Back in the studio, Harry set about weaving his collection of acoustic instruments into his usual style of rustic melancholy. Inspired and fresh from his walk with a theme in mind, he allowed the resulting lo-fi sounds to retain their melodic properties and set them against a backdrop of noise, radio interference and vinyl crackle.
Field recordings taken during the walk and at other locations filter into the mix; an old lady pushes her trolley through the backstreets of a sleepy village, ice cracks under foot on a cold morning and the cogs and gears of a bicycle turn, all the while permeated by fragments of forgotten radio broadcasts.
The final stage of the recording process saw Harry team up with work colleague and piano owner Neil Winning to round off this set of short recordings with an additional element.
After a short period of tweaking, the final outcome was married with track titles to reflect the varying moods of the sky.

For those new to the Spheruleus sound, Lincolnshire (UK) based artist Harry Towell has been releasing experimental material since 2008 on labels such as Hibernate, Under The Spire, Time Released Sound and most recently a collaboration with Ekca Liena on Home Normal.
When he is not manipulating frequencies whether acoustic or otherwise, Harry spends his spare time curating netlabel Audio Gourmet and now its new sister label Tessellate Recordings.

Tessellate Recordings specialises in issuing hand-made limited edition CDrs and accompanying digital versions, releasing albums just a few times a year.
'Cyanometry' is available in a limited run of just 50 copies, with the first 20 sold featuring a hand-stamped tessellating hexagonal pattern in different shades of sky tones. The remaining copies are plain recycled card with hand-stamped titling. Inside is a disc containing the album with printed artwork designed by Christian Roth of Resting Bell, the album tracklist and credits, a 4x4 photographic print of the album artwork as well as a unique image taken just for you.
Also, there will be a handwritten thankyou note.

TSR01 Spheruleus - Cyanometry will be released on 12th July 2012. It will be available to pre-order 2-4 weeks before the release date.

Tessellate Recordings was established in January 2012 by Harry Towell, from Lincolnshire in the UK as a sister label to the Audio Gourmet netlabel.
It will focus on infrequent limited edition CDr and digital releases with a focus on music that loosely falls in the modern ambient music category ... more

Bandcamp Daily  your guide to the world of Bandcamp

Cannibal Corpse's George "Corpsegrinder" Fisher stops by for an interview